The Indian Air Force is one of the major three wings of the Indian Armed Forces which was incorporated in the year 1932. The other two wing being the army and the navy. The air force defends the Indian airspace. Being an important part of the country and defending India and its people, the service done by the employees of Air Force is commendable. For their service they are also paid well so as to keep their family happy and protected. Along with honor and pride, the employees of the Air Force also draw a good salary, which they totally deserve. And with the salary they are also eligible for many allowances and perks which the government provides them. The government keeps the salary and allowances of the Air Force up to date. Here is a detailed analysis of Air Force Employee’s pay-scale. 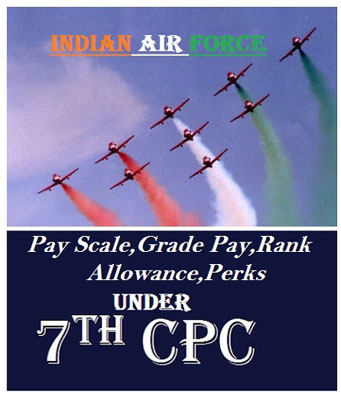 The pay scale of the Indian Air Force is based upon the rank of the officer, the area of posting, branch, and the designation of the officer.

Also for the flying staff there is an allowance called the Flying allowance which various with the position of the flying staff. The Flying staff would include Flying Officer, Flying Lieutenant, Squadron Leader, Wing Commander, Group Captain, and Air Commodore. Each of them having a different flying pay.